Deal or No Deal Live is an adaptation of the wildly popular TV show that has spawned a wave of various games, including slots, scratch cards, and more. Evolution Gaming managed to get closest to what you could see on the TV screen. Only in this version, players can experience Deal or No Deal with a live banker not leaving their apartments.

The goal of Deal or No Deal Live is to predict whether the amount in the final briefcase will surpass the banker’s offer or not. Perhaps, you watched the show and were frustrated when contestants refused or, on the contrary, accepted the banker’s offer when the opposite decision seemed obvious. Now you have the opportunity to try yourself both as a viewer and a player at Deal or No Deal.

As with most other casino games, you can significantly increase your chance to win by following a Deal or No Deal Live strategy.

The game round in Deal or No Deal Live comprises three stages:

During the first two stages, you invest money in the game. The bet size determines the value of briefcases at the drawing stage.

The qualification stage is a lot like playing a regular slot. Match three golden segments to qualify for the draw.

The player may also pick the highest value briefcase. By default, it goes under number 16 and contains a multiplier of 75-500x. In comparison, the multiplier of briefcase 1 is only 0.10x.

In addition, there are three qualification modes available for selection:

Please note that the bet increases 3 times when using the easy mode, and 9 times in the very easy mode. Thus, by increasing the qualification probability, the player reduces the potential payout during the drawing with the same bet size. Once qualified, the player can increase winnings from any of the briefcases. To do so, select a briefcase, set your bet size, and spin the wheel. The briefcase will be topped-up with the amount of money displayed on the wheel. You can repeat this process an unlimited number of times before the drawing begins. The drawing is the most fun part of the Deal or No Deal Live game. The players travel to the studio with 16 briefcases on the tables. One of them placed in the center in front of the banker is the winning one.

The banker will open briefcases in several stages, offering the players to take prize money (Deal) or continue the game (No Deal). When there are only two briefcases left in the game, the banker will offer to switch them and announce the winning number after that. 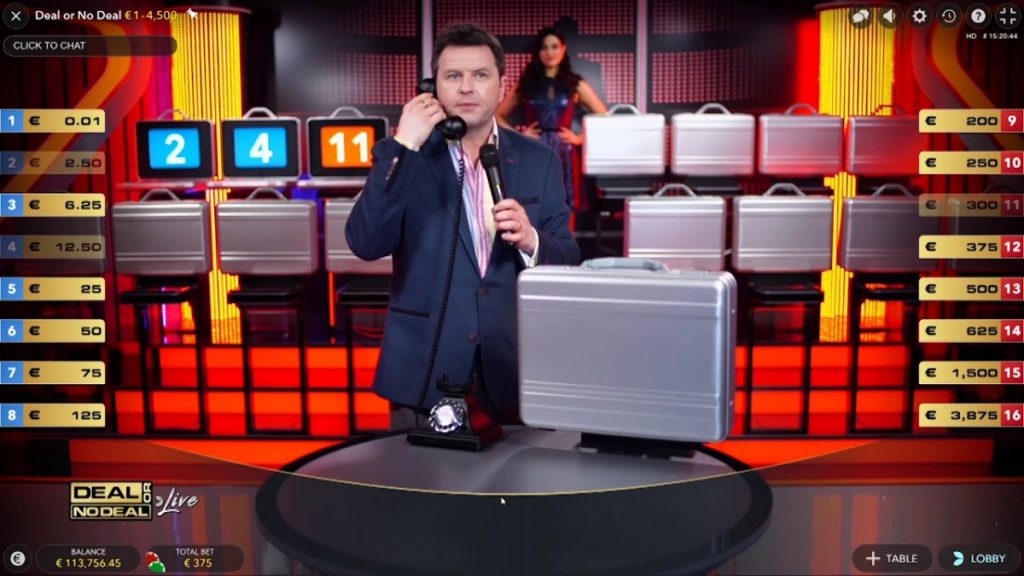 Deal or No Deal Live Odds

The Return to Player (RTP) in Deal or No Deal Live is 95.42%. This value is relatively low for a game of such type. For instance, the RTP in blackjack is 99.5%. However, when playing Deal or No Deal Live, players should also stick to a strategy, as the optimal approach can drastically increase the chance to win.

The high-risk strategy suggests that you should refuse all banker’s offers as long as the largest briefcase remains in the game. Thus, you are hunting for the big prize while rejecting even some lucrative deals. One should realize that this strategy is really risky since small briefcases will inevitably remain in the game, negatively affecting the total payouts.

This strategy is focused on making a stable profit from the game. As a rule, you should accept the banker’s offer if it exceeds 75% of the remaining briefcases and your original bet. With the low-risk strategy, you can avoid long losing streaks but will have to watch from the sidelines when other players get massive wins. Therefore, after you agree to the deal, it is better to return to the qualification tab so you can participate in the next draw.

After trying Deal or No Deal Live for the first time, you may find that the game absorbs balance rapidly. Accordingly, it is better to use strategies that allow you to extract a small profit each round. You may get into an unfortunate situation if you constantly inflate the losses in hope of winning everything back in one round. The high-risk strategy is best suited to those who has sufficient balance and can overcome multiple losses. Otherwise, it’s best not to risk a lot.

Tips for Playing Deal or No Deal at a Live Casino

On top of the Deal or No Deal Live casino strategy, this game comes with basic recommendations that may be even more useful for some players.

Combine the above tips with the Deal or No Deal Live strategy for best results.

Where Can I Play Deal or No Deal Live and Win?

Evolution’s games are prevalent at online casinos, so you are unlikely to have any difficulty finding a place to play. However, not all casinos are equally good, and choosing a wrong site can negatively affect the gaming experience.

We suggest you try the Deal or No Deal Live strategy at LTC Casino. Playing there, you will access the broadest library of live dealer games and game shows, not having to worry about the withdrawal of money earned thanks to the strategies.

Is Deal or No Deal Live fair to play?

Deal or No Deal Live has been developed by a fully licensed game provider and rigorously examined by third-party inspectors. These precautions exclude the possibility of any interference with the game by a casino operator. The outcome of each round is completely random, and the long-term return to player is consistent with the stated by the provider. Thus, Deal or No Deal Live can be considered a genuinely fraud-free and fair game.

How much can I win in the Deal or No Deal Live Game?

In Deal or No Deal Live, the highest multiplier for a single briefcase is 500x. This value is also the maximum possible payout. However, the player has the option to increase the value with the top-up wheel, thus significantly expanding the potential win.

Should I Try Deal or No Deal Live?

Deal or No Deal Live is a game with exciting and unique gameplay based on a popular TV show. Playing wisely, the player can gradually increase the balance and may even try to win big with the additional risks. However, Deal or No Deal Live offers an RTP of 95.42%. In this respect, the game is inferior to some other live games you can find on our website.